We recently discovered an awesome jazz band from Madison, Wisconsin called Ladies Must Swing. Check out our post and head over to their site to learn more and listen to some of their music!

Two young women dressed in ’40s style dresses are dancing for a group of war veterans as the lively melody of “Jump, Jive, and Wail” roars in the background. Is this a scene from a movie set in World War II?

Nope. It’s actually a performance from Ladies Must Swing, a 19-piece all-female jazz band from Madison, Wisconsin. The band has found a niche for themselves playing events in airport hangers and other places that evoke nostalgia for World War II.

So how did these ladies come together? It turns out it was by chance, as it all started with a request to band founder June Dalton for an all-female group to play a concert. The rest is history (no pun intended).

The band’s repertoire includes all the Big Band classics. Their debut album includes standards like “Zoot Suit Riot”, “Route 66” and “Minnie the Moocher”.

This group of ladies is unique in completely embracing the Big Band image, from the songs to the historical costumes. Many band members seek out thrift stores or their grandmother’s closets to find ’40s era outfits, all the way down to the hair nets.

Interest in the Second World War has skyrocketed in recent years, from Honor Flights for veterans to battle re-enactments. In fact, Honor Flights recently made headlines as one group of veterans protested the World War II Memorial shutdown. 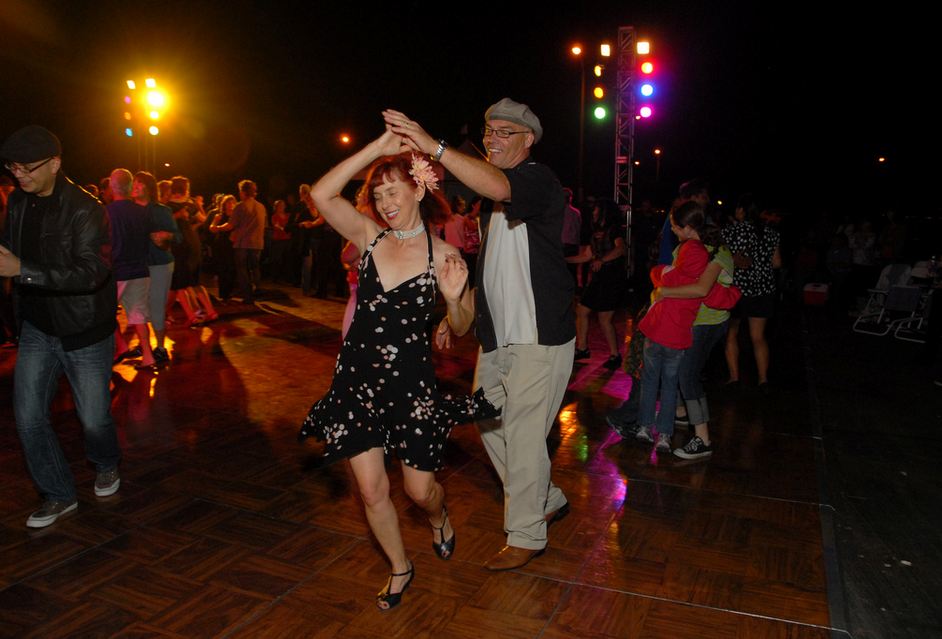 Interest in everything Big Band related has skyrocketed in the past few years, leading to the success of bands like Ladies Must Swing (Photo Courtesy: Port of San Diego/Flickr).

As you could see on TV, the veterans are quickly aging. June Dalton, founding saxophonist for the band, thinks that this is a big reason for this era’s increase in popularity. “There’s a lot of nostalgia for World War II because we’re losing them so fast,” she said.

Learn More About Ladies Must Dance

To learn more about Ladies Must Dance and to watch videos of some of their performances, check out their website at LadiesMustSwing.com.